Graduated in Flute at the “Santa Cecilia” Conservatoire in Rome, he specialized in the contemporary repertoire with Pierre-Yves Artaud in Paris, in the Performing Practices of Early Music with Jesper Christensen and in Traversiere with Oskar Peter at the Schola Cantorum Basileensis.

He attended as well to Composition course in L’Aquila Conservatoire.

Since the 70s he has been active in the field of contemporary and ancient music, in music theatre and avant-garde performance. 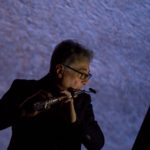 He was invited in 2017 by Roscoe Mitchell to perform as soloist in ‘Frenzy House’, for improviser and orchestra, with the BBC Scottish Symphony Orchestra, Orchestra del Teatro Comunale di Bologna and a Bay Area musicans large Ensemble in San Francisco.

In March 2016, in California for a tour, gave Flute masterclasses for flutists and composers in Chapman University, San Francisco Conservatoire and Mills College in Oakland, invited by Roscoe Mitchell and Luciano Chessa.

From the 2012 he is the main flute player in the EMUFest Electronic Music Festival “Santa Cecilia” Conservatoire in Rome.

He has teached in several Italian Conservatories, Rome, Latina, Napoli, Salerno, Bari and as founder and Artistic Director of the Project Musica nei Musei, creates from the year 1990 musical and cultural events in historical places, as Museums and Churches, in Rome. From 2008 to 2015 Gianni Trovalusci was a member of the Italian Jury of EUYO (European Union Youth Orchestra). He’s member of the Executive Committee of the European Conference Promoters of New Music (ECPNM) and for many years was responsible of the activities of Federazione Cemat, for the promotion of Italian New Music in Italy and in the International context.

He’s Flute Professor and Coordinator of the Progetto Musica Nazareth, a section of ‘Santa Cecilia’ Conservatoire in Istituto Nazareth in Rome.